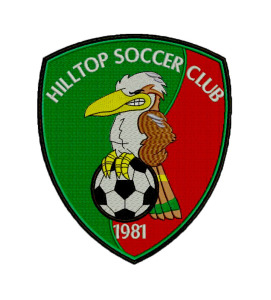 Hill Top Soccer Club was founded in 1981 by Mick Beville and Ian Sherratt, two Hill Top locals. The club started as part of the Hill Top Sports Association, (which included tennis and Little Athletics as well as soccer), and its first members were a single mens team of approximately 16 players.

The original club colours were primarily scarlet red and were a tribute to English football clubs Liverpool and Manchester United. However, once Hill Top started to play games against other Highlands teams, these colours needed to change as a much older club, Moss Vale, already had red as its primary colour. Consequently Hill Top’s colours become, and still are today, green and red as one of the original founders was a Celtic United fan, (green), and the other a passionate Manchester United supporter, (red). At this early stage in the club’s history it fielded only senior men’s teams – there were no junior or women’s team until some time later.

Prior to 1983 there wasn’t a dedicated soccer field at Hill Top. A small clearing of approximately 50 metres in diameter stood in the general vicinity where Boronia Park is currently located today. In 1983 the state government of the day donated $75,000 to the club to dramatically expand/upgrade the playing facilities. This included creating two playing fields, an amenities block and flood lights.

In 1985 the club became a fully registered entity and made a member partner of the HSA. It was during this time (mid to late 1980s) that the club experienced a real growth period, with junior teams starting up and making significant strides under the guidance of Judi and David Packer. This was followed by a womens team being formed in 1993.

In 1986 the Hill Top Soccer and Cricket Clubs partnered in attempting to have a multi-purpose grandstand and scoreboard built at Boronia Park (in the location where the canteen stands today). However, despite the clubs’ collective commitment to fund the upgrade, Wingecarribee Shire Council had an 11th hour change-of-heart and declined the DA when it realized a portion of the development was actually encroaching on Crown Land.

From the mid 1990s the club progressed under the leadership of a number of famous Hill Top families (the Packers, Peckhams, Savages, Duncans, Ludlows, Felbers and Matt Lacey) all of whom played roles in forging the club’s identity prior to Mark Johnson taking over as President in 2009.

Mark Johnson’s reign as President spanned 6 years from 2009 to 2015 and it was during this time that the club transformed its image to that of a more embracing “family friendly” soccer club, leaving behind the boozy/red-neck image and culture the club had unfortunately developed in the preceding years.

In the mid 2000s the club decided to follow the trend of other HSA clubs in adding a logo to the Hill Top Soccer Club name (prior to this it was simply a soccer ball). Unlike other clubs who adopted the likes of Rebels or Lions as their logo, the committee voted for the Laughing Kookaburra, a bird prolific to the Hill Top village and whose laugh is routinely heard at Boronia Park throughout the winter soccer season.

Hill Top Soccer Club today sits as one of the strongest clubs in the HSA with about 160 members (2016), regularly punching well above its weight in not only competing with powerhouse clubs such as Bowral and Moss Vale, but also producing premiership winning players and teams such as the 2015 Under 15s.

In HTSC’s playing history the back-to-back grand final wins for the 3rd and 1st grade teams in 2003 is famously remembered and regularly talked about, particularly the story of the 3rd grade goalkeeper, Brett Peckham, who played in both grand finals and was the hero in penalty shoot-outs in both games. See the attached newsletter and Southern Highlands News article below for the full story.

Find out about the Active Kids Program

Need more information on how to apply for Active Kids vouchers?

Get the latest information about COVID-19 from Football NSW

Keep up to date with information and news updates about the Association.

Follow your teams from your smart phone; download the DRIBL App on your mobile or tablet device

What if it is Raining?

Will my training or match still be on? Check Council's playing field status before you head out

Playing for an Additional Club

Application for Playing for an Additional Club - Exceptional Circumstances